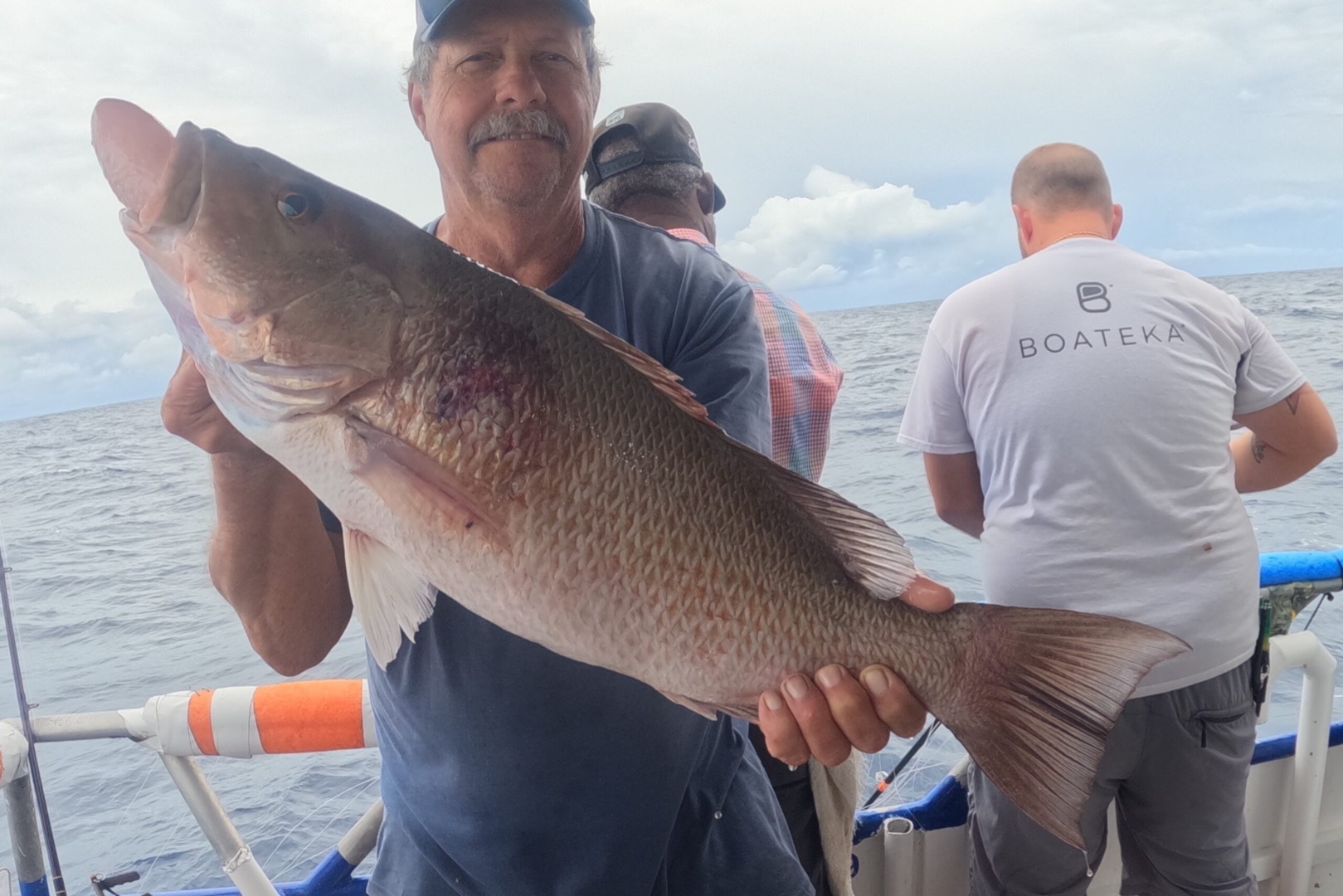 Redfish action is going well around the area currently. We are seeing good numbers of concentrated redfish around the area currently and this should remain the same for a bit prior to the big fall push of these fish near shore to spawn. They are feeding well right now on the white bait, shrimp and still cut bait working well. Cut mullet or ladyfish are go to options but even threadfins or pinfish will work well too. Look for schools of mullet to find some big redfish following the activity, or look around the mangroves, flats, or oyster bars to find concentrations of a variety of sizes.

Snook action is going well still along the beaches and in the passes, but we are seeing a number of these fish start the retreat to the back bay waters. We still see snook around the passes in decent numbers through September and even into October. However, as days get shorter and water temps drop a majority of snook will start to hang further back in the bay. Typically, in the cooler months a majority of snook will retreat to the bayous, creeks and rivers, but between now and then they start to move along the staging areas into those further back bay areas. They are really biting well around the solunar major and minor periods. When the water is moving you can use live or dead bait for a chance at these fun to catch fish. However, its important to think about the presentation and make sure your bait is appearing natural and coming into their strike zone when trying to get a snook to feed while they are staged up. Typically setting up your bait up current and letting it drift slowly back within range is best and most natural.

Mangrove snapper action going super well still around area structures like docks, piers, jetties, and rock piles. Virtually anywhere with some places to hide and cover will be holding these aggressive concentrated, fun to catch and good eating snapper. However, as the days shorten and waters cool these guys will start to dissipate. Get out on the water here soon to take advantage of the higher concentrations of these mangrove snapper. We typically see the bigger ones move to deeper water and the smaller ones move back into the estuaries as time presses on into fall.

Trout action is picky overall through the area, but we are still finding them best around those deeper water grass flats like 3-5ft of water. Also, at night around bridge lights and dock lights are good areas to find trout hitting the concentrating bait. We see the trout targeting the white bait and shrimp most frequently this time of year, but as always, the slower moving soft plastics and imitation shrimp are all great options for the trout too.

There’s still quite a few late season tarpon moving around the area too, but they will also be moving around and moving south mostly for the cooler months. While we still have a more resident number of tarpon, numbers severely thin out. However, the smaller fish often end up and stay in our back bay estuaries.

Shark action still going well around the bay area with plentiful smaller sharks in the bay and estuaries and bigger sharks hanging on the beaches. However, like the mangroves and tarpon this is the time of year many of the numbers head back to the gulf. Unlike both other species most of these guys will head out of the area together, but we then see another big push of larger less frequent sharks. For example, in the warmer spring and summer months we typically have a lot of the bulls, blacktips, bonnetheads and others while in the cooler months we see the bigger bulls, hammerheads, and even the white sharks.

Hogfish action is picking up slowly near shore. We are seeing more and more of these guys coming up on our five and ten hour trips. While we aren’t seeing huge numbers we are definitely noticing an increase already. They will continue to concentrate on our shallower water smaller ledges as we move in to the cooler months. We are typically using around 30lb leader and about 4ot hooks for the hogfish, but our new Hubbard’s Marina banana lures by Roggie’s rigs are catching the hogfish up too! We look forward to the coming weeks while the popular hogfish action continues to pick up. Live shrimp is a better and better option while out there near shore fishing this time of year as the hogfish pick up.

Gag grouper action is a little rough near shore right now, but we are picking up some nice keepers here and there inside 100ft off the beach. However, it takes a little bit of luck and some good areas with great bait and experience to get that hard fighting shallow water gag out of the bottom area he can break you off. These guys will become more and more concentrated as the water cools and the cold fronts start up. However, right now they want some bigger live baits and some of the big dead baits. Typically, while fishing near shore for the gags were using around 60-80lb leader but its often they will bite while were fishing the lighter leader and using lighter than sixty pound and successfully landing a nice gag is tough. That’s often while near shore gag fishing is tough, but if everyone can work together and only be using that 60lb then your chances go up considerably not giving that smart and leader shy gag another option.

Lane snapper action is going well near shore around that 60-100ft area on the dead bait or live shrimp. Typically, cut squid chunks is all you need to target the lanes, but the live shrimp give you a really good shot at some bigger lane snapper. Chunks of threadfins are a great option too.

Mangrove snapper fishing near shore has been going well and were expecting that to remain the same through the coming early spring period. You want to use smaller chunks of threadfin on the double snell rig and around 4ot hooks. However, we are doing well the knocker rig style set up and the live shrimp too!

Red grouper fishery has closed, but they are hard to avoid when fishing near shore. We are still seeing lots of super aggressive small to medium red grouper, while it’s a great sign for the future of our fishery, it does create bit of an issue. You really need to be aware and make sure you get these guys up quickly, dehooked quickly, and back in the water quickly either with a venting tool or descending device if needed. If they are floating away dead then they will never get big enough for anyone to keep so make sure you are prepared with a good quality dehooking tool, like our hook extractor here: https://shop.hubbardsmarina.com/shop/Tackle/Tools/Hook-Extractors–Dehookers/p/Hook-Extractor-Barracuda-135-x56386467.htm

Lately weather has been challenging to say the least for our truly offshore deeper waters. We have nearly constant offshore weather with steady rain and storms. However, we are sneaking out there between the breaks in the weather. Doing really well out deep on big snapper and steady yellowtail with some good grouper action!

Yellowtail have been surprising out deep lately we are seeing some solid fish on the cut threadfin, threadfin chunks and cut squid. They love biting while targeting the mangrove snapper at night and even through the daytime periods too. However, like the mangroves they can be very picky and leader shy so lighter tackle is necessary.

Mangrove snapper fishing has been hot, and the overcast stormy weather actually helps with this providing us more opportunities on the mangroves. Typically, we do best on the mangroves at night, but when its stormy and overcast the mangroves will still bite well through the day. Often, that is when we see our best mangrove snapper action is a very overcast and stormy kind of day if the anchor heading isn’t shifting all over the place or making us swing like crazy.

Gag grouper fishing is going well out deep on big dead baits and live baits too. Now that things are cooling a bit the live bait is starting to work better and better compared to the dead of summer when the big dead baits are better options for the big gag grouper. Using that 80-100lb leader is best for these big gags but it makes it tough sometimes when they can get leader shy and unaggressive.

Scamp grouper still steady when fishing closer to 150-200ft of water. We see them most on the smaller pinfish, threadfin or even vertical or SPJ jigs. These guys love those deep-water potholes and smaller ledges. Often on bigger structures they can get overpowered by other more aggressive fish and are hard to target with success.